How to Stop Ice From Sliding off a Metal Roof 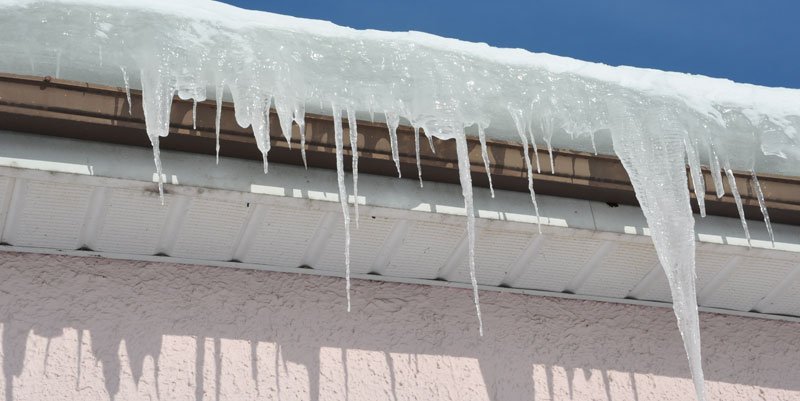 As Maryland, Virginia, and D.C. homeowners prepare for winter, roof maintenance plays a central role. With the DMV’s penchant for unpredictable weather patterns and heavy snowfall, there’s no telling what sort of damage might be done to homes and gardens within a few short months. Those with metal roofs might already know what it’s like to wake up to an avalanche of snow and ice sliding off their homes as the sun rises. In addition to the safety hazard posed by large amounts of falling ice, these slides can destroy even the strongest of roofs. Those who want to protect their homes must understand the risks of ice falls.

Why does ice fall off roofs?

During periods of extreme weather, it’s not unusual for large amounts of snow and ice to settle on rooftops. So long as weight is distributed evenly and temperatures stay below freezing, ice will remain frozen on the roof. However, that’s just not how things work. After the storm is over and temperatures rise, ice begins to melt. In addition to the weather, ice melts because heat rises from inside the house to the highest point on the roof. This upsets the heat distribution of the ice that carpets the roof. Soon, thawing ice begins to slide off the roof.

Why is falling ice a problem?

Falling ice can cause significant damage to people and private property. Perhaps most important, ice falls threaten anyone who happens to be under them. Ice weighs a whopping 57 pounds per cubic foot, so falling ice can easily be compared to a falling rock. As a result, homeowners with children are especially cautioned to beware of ice falls. Cars, pets, and gardens are also at risk. And even if nothing is hit by falling ice, it can still do serious damage. Picture a mass of ice sliding slowly off a roof. Anything and everything in its path will undergo stress as a result, including any roof penetrations (for example, heating vents) or gutters. As the ice falls, it pulls on these features, and if there is enough of it, these features can come right off the roof. In addition, as ice melts, slides, freezes, and slides again, it can pull the screws out of roof panels and damage the structural integrity of the roof itself. Sliding ice has destroyed many a good metal roof.

How do you prevent ice falls?

To prevent ice falls, homeowners can modify their roofs as well as their attics. One way to reduce the chance of an ice fall is to improve attic ventilation. The closer the attic temperature is to the outside temperature, the lower the chance of a fall. If snow and ice melt unevenly on a roof, that’s a good sign that attic ventilation could be improved. On the exterior, homeowners can use snow and ice breakers, also called snow stoppers. These are specially designed retention systems that keep snow and ice on roofs and off people, cars, gardens, and pets. Ice breakers come in all sizes and shapes, including pipes, rails, stops, and fences, but the essential function of each is the same: to act as a snow deflector. These barriers prevent snow and ice from accumulating toward the sides of roofs where they might slide off and hurt someone. There are several important calculations to be done when installing snow breaker systems.

Which ice retention system is right for me?

Ice retention systems are engineered for all sorts of roof types and weather conditions. That means that some retention systems will be more suited to shingle roofs in moderate weather, while others will be specially designed for metal roofs and freezing weather. It all comes down to the anticipated weight of the snow and ice on the roof, as well as the failure point of the snow guard. While some homeowners are comfortable making such calculations on their own, it might also help to call a professional inspection service to get an expert recommendation

Because of the human and property damage possibilities of ice falls, it is crucial to install ice retention systems before extreme weather hits. It’s much easier to get roof work done before freezing temperatures set in. If you are looking to prevent ice falls, don’t wait until icicles are breaking from your eaves.